Independent of the method you use to produce recombinant viruses, at some point you have to transfect insect cells with virus DNA to reconstitute infectious virus particles.  When using the flashBAC™ system, you simply add it to your transfer vector containing the foreign gene and use a suitable transfection agent (e.g. baculoFECTIN II )to achieve entry of DNA into the cells.  The transfected cells are then incubated at 28°C for about 5 days to produce the P0 virus stock.  We define a P0 virus stock as the virus progeny from a transfection or cotransfection.
One of the questions we are frequently asked is how to recognize if the cells are infected with virus.  This can be a particular problem if you are new to the baculovirus-insect cell expression system.  However, even experienced users can sometimes struggle to determine with confidence if the cell culture is virus-infected.
When setting up a transfection experiment it is always useful to include a negative control that lacks virus DNA but preferably includes the plasmid transfer vector.  This serves as a control for the effects of adding DNA, which does not replicate and the transfection reagent.  It is also worth leaving one cell culture untreated so that you can observe the division process unhindered by the transfection process.
We also recommend using individual cell culture dishes for each combination of virus DNA and plasmid transfer vector rather than multiwell plates.  This reduces the chances of cross contamination between samples if you are performing multiple transfections. Mixing up recombinant viruses at this stage can be very frustrating later on in the process of characterization.
It also goes without saying that you need to use Sf9 cells in robust good health.  Check out our previous blogs on cell culture or our insect culture handbook to see how to maintain cells in prime condition for use in virus and protein expression work.  Harvest cells from your stock culture when they are in mid log phase.  If your cells do not look good after plating them out in culture dishes then postpone your cotransfection until better ones are available.  This may be frustrating in the short term but will ultimately result in a more successful outcome for your work.
The initial symptoms of virus infection in insect cells are very subtle.  There is an enlargement of the nuclei and the outer plasma membrane appears slightly better defined. One of the best ways to spot these effects is to compare the transfected cells with the control plates.  A further point to note is that when cells become virus-infected they will cease to divide.  Therefore, the sub confluent cell monolayer will not close up.  At five days post transfection, signs of virus infection should be more obvious.  The cells appear granular.  Again, compare these cells with untransfected controls.
In Figure 1, we give some examples of cells transfected with virus DNA. 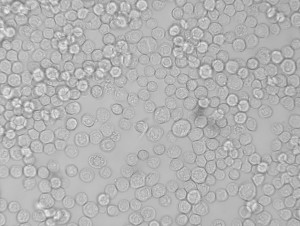 Figure 1.  Sf9 cells cotransfected with flashBAC™ and a plasmid transfer vector at 5 days post transfection.  Note the cells with enlarged nuclei in an area lacking confluency.
Although we usually recommend harvesting cotransfections after 5 days, if you leave them a bit longer then the virus infection continues to develop and the cytopathic effect is more obvious (Fig. 2.) 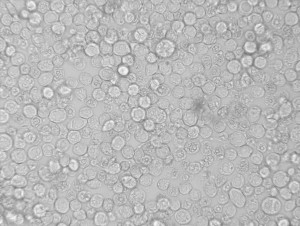 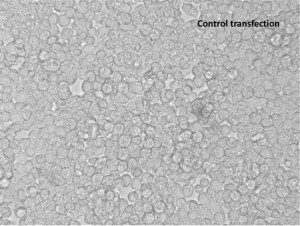 Figure 3.  Sf9 cells from a mock transfection where only a plasmid transfer vector was used.
Finally, if you are still unsure if the transfection has worked, use 100µl of the P0 stock to inoculate Sf9 cells in a small cell culture dish.  After 48-72 hours, these cells should display very obvious signs of virus infection that are unmistakable.  Alternatively, you can use QPCR (baculoQUANT) to determine the infectious titre of your virus stock.  This procedure can be accomplished in a few hours.
If you have already made a recombinant virus from a previous project you can also use this to infect another dish of cells to provide a positive control for virus infection.  However, it is best to inoculate the cells with a very low multiplicity of infection to mimic the transfection process, which initially produces a small amount of virus from the initial round of virus replication.  When using flashBAC™, you can also include another positive control comprising the virus DNA and the pAcRP23.lacZ transfer vector.  Subsequently, you can add a little X-gal to monitor beta galactosidase production.
In our next blog, we will discuss amplification of the PO stock to produce working stocks that can be used to initiate protein production.