Introduction to the Baculovirus Expression System

Baculoviruses are in many respects an odd choice for use as an expression system to make recombinant proteins.  In their natural environment they infect insect larvae/caterpillars, which frequently results in the death of the host and its reduction to a puddle of progeny virus (Fig. 1).  They are also unusual in that they produce two structurally different forms in their life cycle. The first is a lipoprotein-enveloped particle that buds from virus-infected cells and spreads infection throughout an insect.  Subsequently, virus particles are occluded within an abundant protein (polyhedrin) in the nuclei of infected cells to form polyhedra (Fig. 2). This form of the virus acts as a dispersal agent for the virus between susceptible hosts in the field. 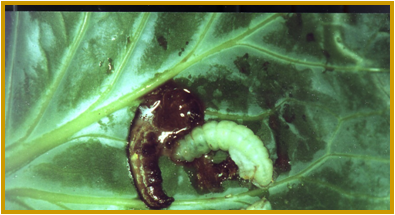 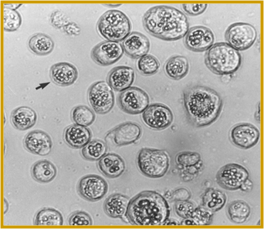 Left: Figure 1. AcMNPV-infected T.ni larva (left) and uninfected larva (right). Right: Figure 2. Virus infected Sf9 cells containing polyhedra
Some baculoviruses can also be propagated in insect cell culture.  The one most commonly used is the Autographa californica nucleopolyhedrovirus, so named after the alfalfa looper.  In cell culture only budded virus is required to maintain an infection. The polyhedra become a redundant structure.  It is possible to delete the gene encoding polyhedrin and replace it with your sequence of choice to make recombinant proteins.
Baculoviruses have several advantages as expression vectors.  Perhaps most importantly, they are able to produce large amounts of complex proteins owing to the very strong polyhedrin gene promoter.  The circular nature of the virus genome and the way that it is packaged in a rod-shaped nucleocapsid means that it can be expanded to accommodate very large gene inserts – up to 25 kbp – without affecting budded virus production.  The insect cell is able to perform most of the post translational modifications required for eukaryotic protein targets and thus preserve biological activities
What also helps production of recombinant proteins is that the polyhedrin gene promoter is active in the very late phase of virus gene expression, with maximal activity between 24 – 72 hours post infection (Fig. 3).  This is after most budded virus has been made, which is therefore largely unaffected by synthesis of any proteins that are slightly cytotoxic.

Figure 3. Phases of baculovirus gene expression
Multiple gene targets may also be expressed owing to the presence of a second, highly expressed baculovirus gene called p10.  This is also expressed in the very late phase of virus replication and is dispensable in cell culture. The polyhedrin and p10 gene promoters may be duplicated so that multiple expression constructs can be assembled.  This permits the production of structures such as virus-like particles or enzymes comprising several sub units.
But how can you make a baculovirus expression vector?  The virus genome is large (130 kbp) so it is hard to ligate genes directly into the DNA.  A more indirect approach is utilised, which we will describe in our next blog post…