Following on from our last blog we briefly describe insect cell culture media.  It used to be that all animal cell cultures depended on the addition of calf serum to a basal medium to ensure growth.  Insect cells were no exception, although it always seemed a little odd that mammalian serum could aid their propagation.  While insect cells were only used in basic research for the study of insect viruses this didn’t matter too much, although the maximum densities obtained were rather limited (up to 2-3 x 106 cells/ml).
With the advent of protein expression systems based on insect cells, either baculovirus vectors or Drosophila continuous vectors, there was a need to produce recombinant protein in the absence of mammalian proteins.  The presence of serum in media also resulted in frothing when the cultures were maintained in shake/suspension format. Bursting bubbles caused shearing and subsequent cell death.
In the 1990’s the first serum-free insect cell culture media were developed.  These were a great leap forward, although it could be difficult to adapt cells used to mammalian serum to a medium lacking this ingredient.  Once cells were adapted, it was found that much higher densities could be attained. For baculovirus vectors, this resulted in the production of virus stocks with higher infectivities and the facility to infect cells at a higher density for recombinant protein production.  Also, for the first time one didn’t have to worry about that big band of serum protein in your stained gels!
OET markets an excellent serum-free medium from Expression Systems LLC that is fully capable of supporting the growth of both Sf9 and Hi5 cells.  We use it in our own laboratories for both research and contract service work. 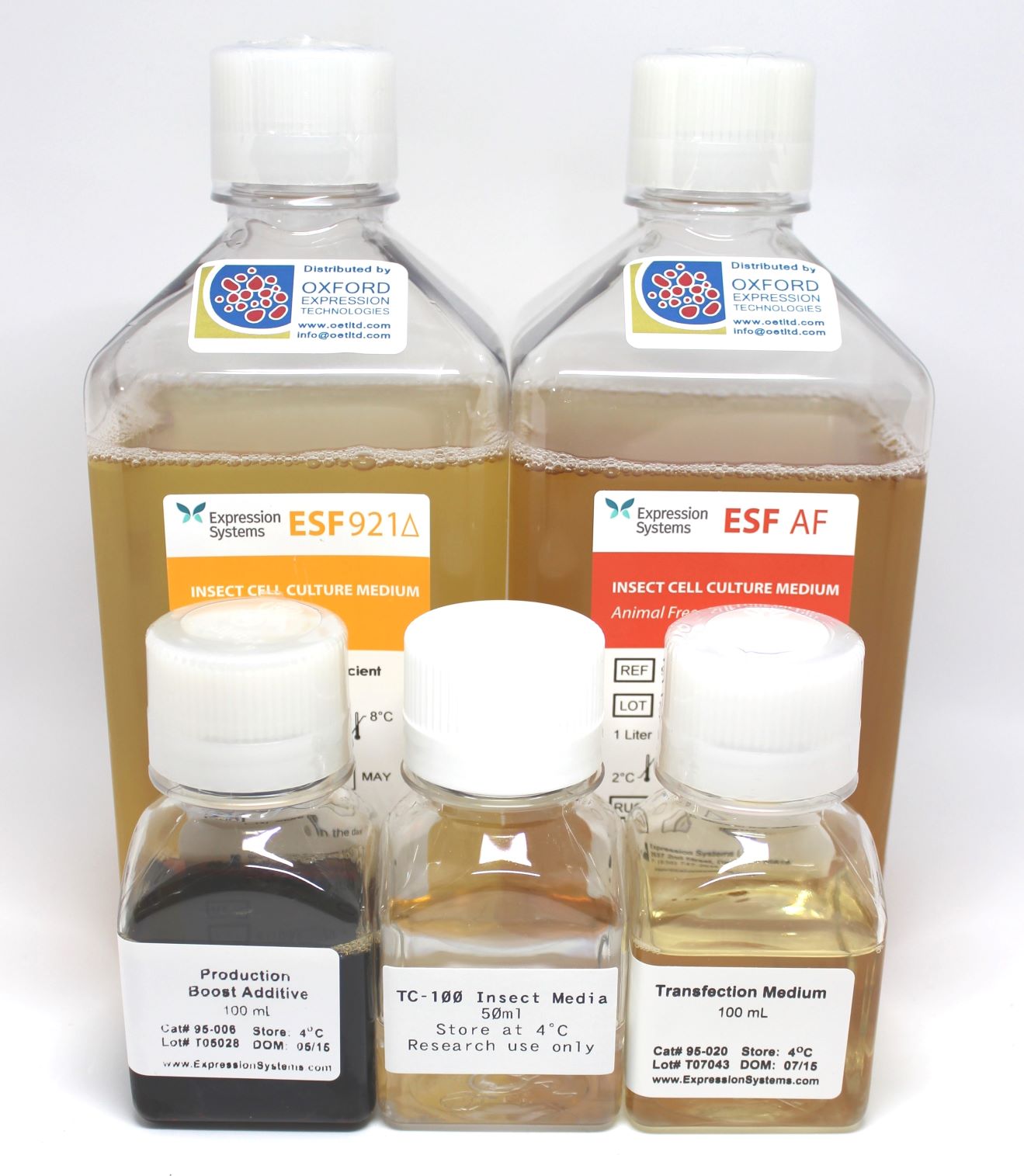 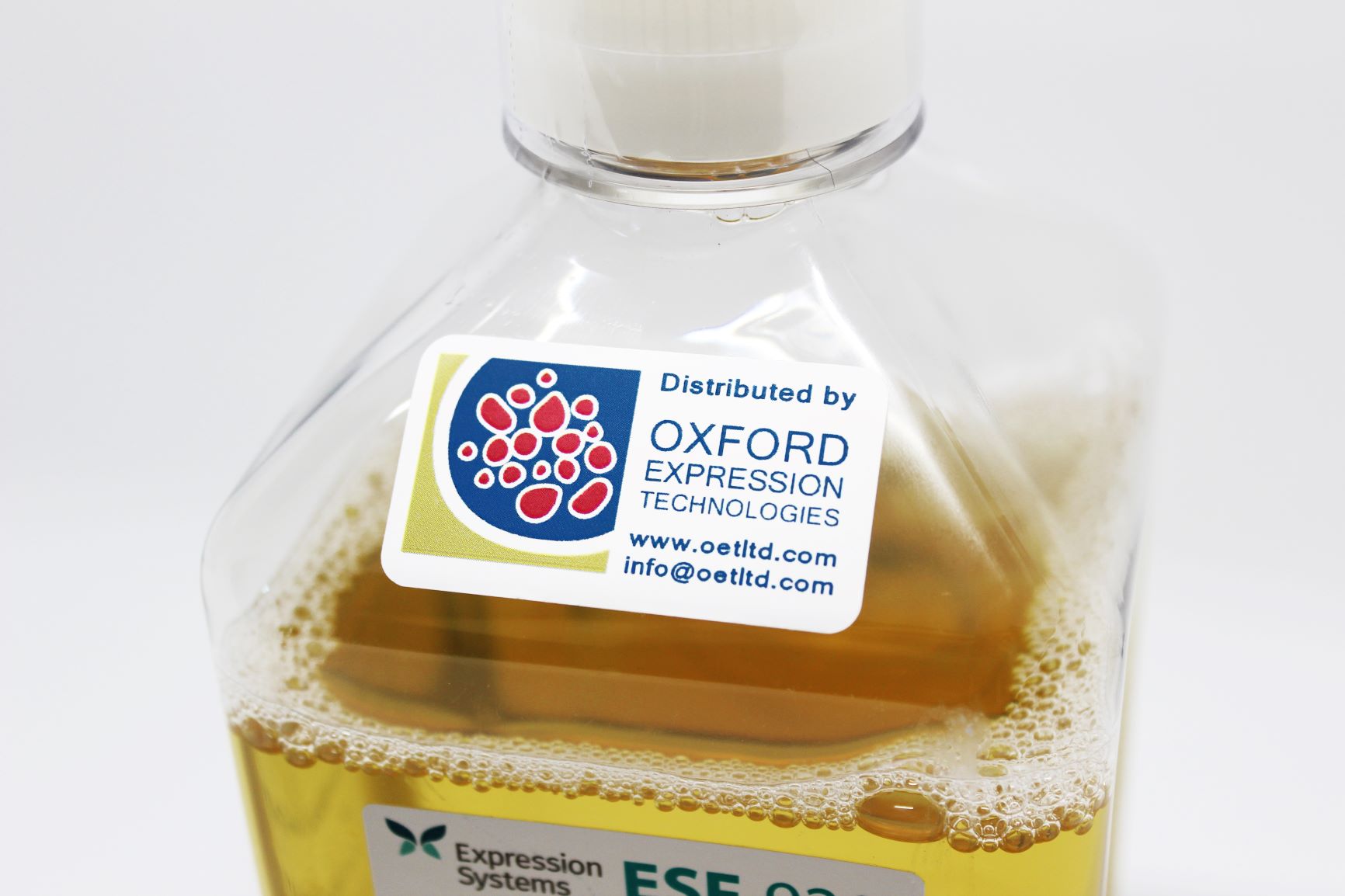 Although the higher cell densities obtainable with serum-free medium are a great selling point, one does have to be careful not to push the limits of cell growth too much.  Once you reach 107 cells/ml, cultures have a nasty habit of suddenly “crashing” to zero viability in a very short space of time.  We tend to sub-culture cells when they reach between 4-6 x 106 cells/ml to keep them in a healthy state.  Various manufacturers of serum-free media claim that densities higher than 107/cells/ml are possible; we agree, but prefer to be cautious in the maintenance of our cells!
More recently, insect cell culture media completely free of any animal products have become available.  These are required if you wish to move into clinical manufacture of a protein for therapeutic use. We also market one of these, again from Expression Systems LLC.  Of course, you will also need a cell line that is GMP-compliant. These are not cheap to obtain. We will talk more about these in a future blog.
Finally, just a word about switching between different serum-free media.  Different manufacturers obviously keep their formulations very secret. However, they are all probably very similar in composition.  This doesn’t mean that if you change to a new brand that your cells will immediately behave the way they did in their old one. We recommend that you carefully monitor how your cells are growing if you introduce a new medium.  Before using them in critical experiments make sure that you are happy with their rate of growth and general health. Shiny cells are generally happy cells! It is also wise to keep some cells maintained in your old medium for a while as a back up.