How Healthy are your Cells?

Hopefully after the seasonal break your insect cells are still in good health.  Recognizing healthy cells seems a no brainer, but if you haven’t got much experience with insect cells it can be more of a problem.  Experts often talk about “shiny appearances” and “well defined membranes”, which is fine if you know what they mean but puzzling if you are in your first foray into cell culture.  So to help you out, in this blog we provide some images of Sf9 cells in various conditions.  We set up a small shake culture and then sampled cells over the next few days by observing them after decanting 1ml into a 35mm culture dish.  We used a microscope set up for bright field vision rather than phase contrast.  The latter has its uses but for this purpose ordinary light seems to work best. 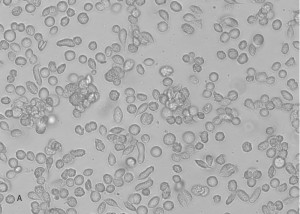 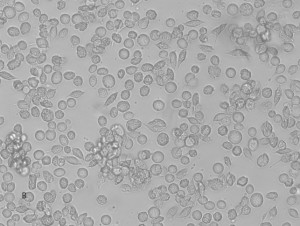 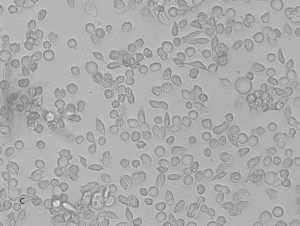 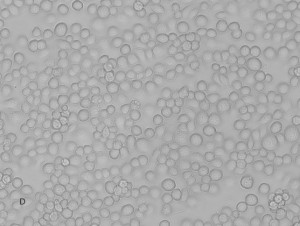 Figure 1.  Sf9 cells grown in ESF 921 medium in various states of health.  A-C,  Poor quality cells from overgrown culture; D, good quality cells.
How can you rescue cells in poor health?  Our primary recommendation would be not to at all!  After cells have been stressed it is never clear if they recover to their former glory.  There may only be a marginal decline, but this could make a major difference to you if you are using them to purify protein.  Instead, we suggest reviving fresh cells from liquid nitrogen stocks.  But what if you don’t have such stocks?  We know that not everyone can store cells cryogenically.  In this case, if your cells haven’t declined too much you can adopt the following procedure.  Count your cells in your current suspension culture and dispense about 3-4 x 106 cells (dead and alive!) into a 25cm2 flask for monolayer culture.  Allow living cells to attach to the plastic (1-2 hours at 28°C) and then remove the medium and any “floaters” – discard safely.  Wash the cells that have attached with fresh medium and then add a further 5mls of medium prior to incubation at 28°C.  Continue the incubation until the cells have formed a thick monolayer.  You can then detach cells from the flask by rigorous tapping on a bench prior to establishing a new suspension culture. The advantage of this procedure over leaving the cells in a suspension culture is that you remove dead cells and spent medium before trying to revive the cells.  Providing that you have some viable cells in the original suspension culture you can usually rescue the culture.  They may take a while to recover so be patient.  We find that ESF 921 medium works particularly well for reviving poor quality cells.
In our next blog, we will talk about transfection of insect cells with baculovirus DNA.  Although this process is relatively simple, we know that many people struggle to recognize the signs of virus infection.  We will provide some images of cells transfected with flashBAC™ DNA and a transfer vector to show you what we mean.