Following on from our last blog on the revival of cells stored in liquid nitrogen, we now provide some tips on the continued healthy culture of insect cells.  Whether you are maintaining cells as monolayer or suspension (shake or spinner) culture you will probably faithfully record your name/medium used/date of sub culture/passage number on the side of your new flask.  Alternatively, instead of using a new flask you may simply dilute the cells in their existing vessel and continue to culture them – more about this below.  A question that often vexes people is how many times a culture of cells should be sub cultured or passaged before they are no longer fit to use.  There is no simple answer to this question as it relates to the healthy culture of insect cells.
The growth of any cell culture is governed strictly by environmental conditions such as temperature, nutrient availability and pH.  In a closed system such as your typical culture vessel, only temperature can be easily controlled.  As the cells divide, nutrients are consumed, the pH will change and eventually conditions will reach a tipping point where after the healthy culture of insect cells becomes very difficult.  Ultimately, the culture will perish unless it is revived with fresh medium in a new flask.  After this operation, we say that the passage number of the cells has increased by 1.
If you think about it, the passage number of a culture is rather meaningless.  For example, if we seed our healthy culture of insect cells at 0.5 x 106 cells/ml and then sub culture them again when they reach 2.0 x 106 cells/ml (probably after 2 days), this will mean that in contrast to allowing them to reach 8 x 106 cells/ml (after 4 days), we will increase the passage number of our stock twice as fast.  However, both cell cultures have been growing for exactly the same period of time.  While the less frequent passage interval sounds attractive, it might also mean that as the cells approach the higher density that nutrient stress has started to affect our culture.  Therefore, when we do sub culture or passage our cells after a longer interval, we might be starting our new flask with cells that are slightly unhealthy.  If this is the case, then you often see a slight delay in the new culture kicking into its exponential phase of growth.  So while a lower passage number for a cell culture sounds attractive, it can mean that your cells experience regular periods of stress, which we define as nutrient deprivation and sub optimal pH.
So if cells could express an opinion, they would opt for continued ideal culture conditions, rather than famine or feast.  The latter would be like us eating only one enormous meal twice a week and expecting to feel fit and healthy in the intervening periods.  Before we start stretching analogies too far you can probably catch our drift on this topic.  It is better to sub culture your cells more frequently and avoid the extremes of culture density than push the envelope of cell density too far and risk poor quality hosts for your protein expression project. We provide examples of good and bad cells below (Figure 1.) 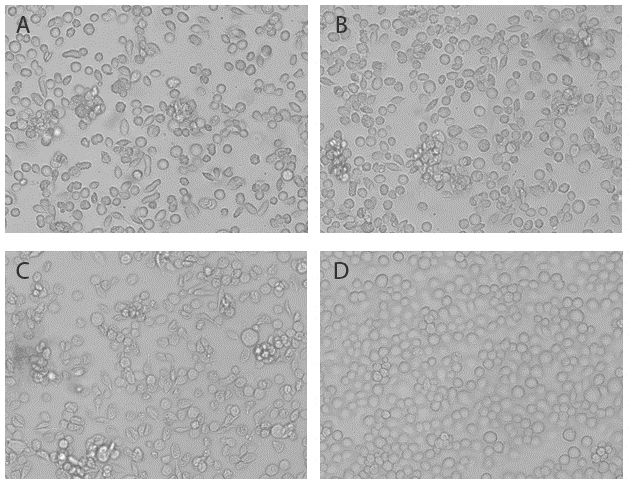 Figure 1: Sf9 cells grown in ESF 921 medium in various states of health. Top row, left (A) and right (B): poor quality cells from overgrown culture. Bottom row, left (C); poor quality cells. Bottom row, right (D); good quality cells.
Returning to the question of the ideal passage number for a healthy insect cell culture before you think about reviving new batch of cells, there is no hard and fast rule to follow.  If your cells look healthy and keep producing protein then stick with your current stock.  It is a good tip, if using recombinant baculovirus expression vectors, to have a control virus that you can employ to monitor how well your cells are performing.  If you don’t have one as you are new to the baculovirus system, talk to us here at OET Ltd. as we might be able to supply you with one.
Just a few words about the reuse of cell culture flasks.  We know some labs that sterilise dirty disposable plasticware, wash the flasks, sterilise them again and grow cells in them again.  Not a bad idea if you want to save money.  However, when you passage your cells, you can also simply dilute them back into the same flask to save both time and precious research funds.   We occasionally do this for convenience, but you do need to be wary of the “tide mark” that often develops in such flasks.  In a shaking culture vessel this comprises a line of cells that adheres to the plastic at the highest point that the medium reaches.  Over time, this line of cells becomes thicker and is often accompanied by the appearance of clumps of cells in the culture.  This doesn’t quite represent disaster, but it does make counting cells rather difficult.  It is also a problem when you come to infect the cells with recombinant viruses.  So be cautious about reusing disposable plasticware.  It can be economic to do so, but can also set you up with problems subsequently.
Finally, don’t underestimate the time and effort needed for healthy culture of insect cells.  Don’t be devoted to a routine that says you have to passage your cells at set intervals.  Some labs do this and it can be very successful.  However, incubator/warm room temperatures can fluctuate occasionally – frequent opening of doors can play havoc with environmental controls.  Rather, we suggest you at least look at your cell culture flasks daily and develop the “Mark I eyeball” assessment of cell density so that you can judge when to take a close look using a microscope to judge their condition.  This will pay dividends in the longer term.